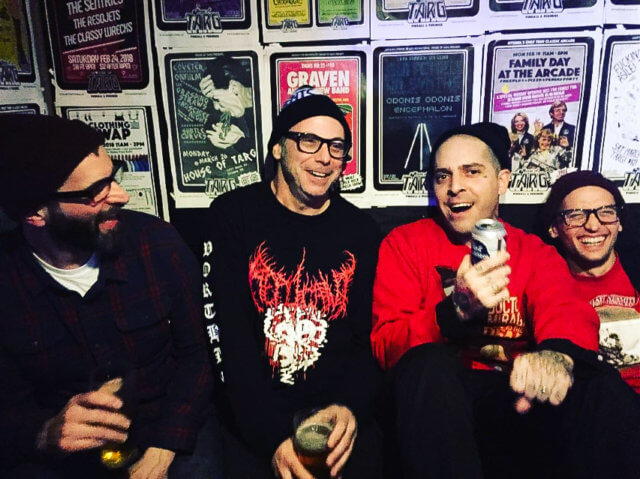 Doc Hopper was a punk rock band started in fall of 1990 by Chris Pierce in Randolph, Maine. The formula was to sound like SST records bands in the vein of Descendents, Husker Du, Black Flag, as well as an infatuation with Canadian power pop bands the Nils and Doughboys.

In autumn of 1991, he and bassist Jon Madden moved to Boston, following their drummer who was attending Mass College of Art and who left the band shortly after the spring ‘92 recording of their first ep “Sweetums” (on Constant Change/Atomic Action Records out of Newport RI).

They recruited Greg Hoffman as their new drummer in the fall of 1992 and started their almost decade residency at Hellgate, their house and practice space in Allston, a student neighborhood close to BU. There they started writing their first lp “Aloha,” which was released by friends and Sinkhole band mates Ringing Ear Records for the cd/tape and Reservoir Records for the vinyl in spring 1994.

Doc Hopper toured the states relentlessly for the next year and returned home to record their second Ringing Ear lp, “Ask Your Mom,” in 1995. That year they also won the Boston-based Rock and Roll Rumble (‘til Tuesday and Gang Green won in 1984 and 1985 respectively) and had some local infamy the following couple of years.

After more tours and Pierce relocating to New Brunswick, NJ to open a recording studio, DH landed on NYC-based GoKart Records. There, they released a troubled double-split lp with friends Weston in 1999, called “The Stepchildren of Rock,” followed shortly by their third lp “Zigs, Yaws, and Zags” and a tour with The Lunachicks and Buzzcocks on the ‘GoKart Across America’ tour.

They played a few more years with numerous second guitarists (and Fid who filled in for Jon Madden on bass while Jon was in Japan for a semester), until finally claiming to be done in 2002.

They played again in 2006 for Insub Fest and the opportunity to yell at GoKart Records for being scumbags, then reformed in 2013 with Fid again on bass and Mikey Erg playing second guitar for the final line up.