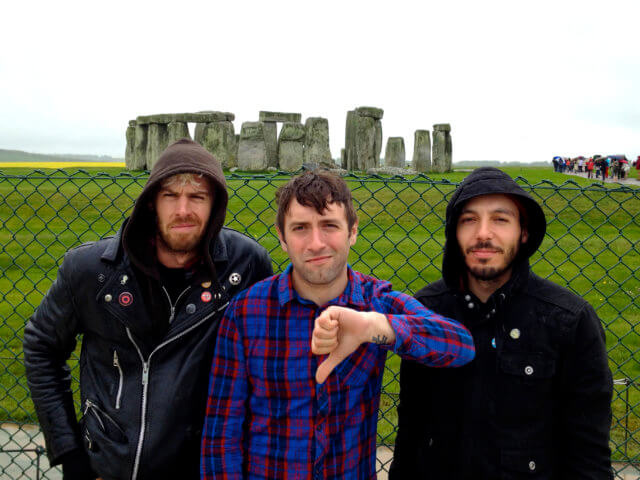 When Devin from the Cobra Skulls sat down to write Agitations, the third Cobra Skulls full length and first for Fat Wreck Chords, due out Sept. 27, he found himself in a different situation than he’d ever been in before. I’ll let him tell you all about it:

“In the past I’ve always written songs sporadically and when it seemed as though a song wanted to write itself, but for our new album, Agitations, the process was a little different because time was a bit of a constraint… I had less than a month to write an entire album. Solitude was definitely a necessity for me to write…so I moved into a cheap, dirty, weekly motel in Reno”
The result is thirteen of the most blistering, concise Cobra Skulls songs ever assembled in album form. Only one track clocks in at over three minutes and as usual, the band is almost incomprehensibly angry at the world at large. No target is too weird, too outside the normal realm of traditional punk angst for the Cobra Skulls. Agitations sets its sites on the crumbling economy, our unsustainable auto-obsessed culture, the xenophobia bred in the post 9-11 political climate, their own families and friends and prisons that are run like profit-turning businesses. Nothing’s spared in the latest from these hyper-intelligent, incisive, uncompromising, politically charged, lovelorn misanthropes, but that’s par for the course for an album from Reno’s favorite sons.

Formed in 2005 in the Biggest Little City in the World, Cobra Skulls began packing basements and garages around the southwest before catching the attention of Red Scare Industries in 2006, where they dropped two full lengths and began to make noise on a more national level. Fat Mike eventually got the message that an angry punk band with an unclassifiable sound that seemed to simultaneously worship Bad Religion, the Misfits, The Clash, and Mike Ness’s rockabilly songs was making the rounds, so he signed ‘em up in a hurry and helped them put out the critically acclaimed 2011 ep Bringing the War Home.

When it was time for a debut Fat Wreck full length, the Cobra Skulls hit Motor Studios in San Francisco (NOFX, Lagwagon, pretty much everything on Fat from the 90’s) to record Agitations, the results are 13 songs that Fat Mike has since referred to as ‘the best’ Cobra Skulls album to date. In the words of Devin:

“Every song has a distinct personality. Some are fast, some are mid-tempo… Some songs sound influenced by blues, rockabilly, pop and some even have hints of jazz, funk and folk, but all songs are rooted in an old school punk spirit.”
The Cobra Skulls are renowned for their nonstop touring and the cycle for Agitations will be no exception. For starters, they’ll be hitting the whole of North America with Nothington, including a stop at the Fest in Gainesville. After that, you know how it goes. They’re going around the world to scream about the fucked up injustices that plague the world in both English and Spanish. And if you don’t speak either of those? Well, you can just marvel at the seamless blending of punk, ska, blues, jazz and rockabilly that the Cobra Skulls are known for. Or you can explain how you’ve read this bio, because that’s pretty impressive too.