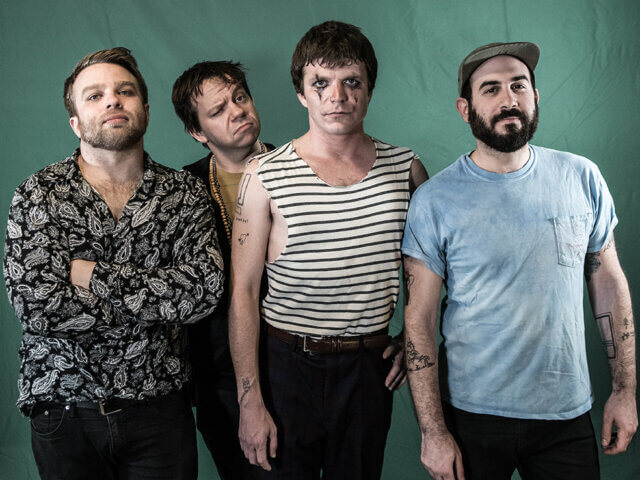 Some of history’s best punk bands came and went before they had a chance to get comfortable (and boring), so it’s not surprising that PEARS frontman Zach Quinn had doubts when it came time to record the band’s third full-length. While PEARS have only existed since 2014, maybe a couple LPs and hundreds of explosive live shows were enough?

“I was perfectly prepared to have my Blue Album already,” Quinn says, laughing. “That whole fucking cliché of ‘Our best record’s behind us.’

With the imminent release of PEARS (March 6, Fat Wreck Chords), Quinn says, “Maybe not!” But there’s no maybe about it. PEARS is a significant step forward for a band that has grown by leaps and bounds on each album.

Recorded with Chris Fogal (The Gamits) at Black in Bluhm Studio in Denver, PEARS is 14 songs and 31 minutes of the band’s signature hardcore: heavy, melodic, blistering, pointed, and surprisingly catchy. While it continues down the path set by Green Star and 2015’s Go to Prison, PEARS finds the band taking a different creative approach.

“The last PEARS record, almost every detail was worked out before we ever stepped foot into the studio,” Quinn explains. “This record, we went in with skeletons of songs and put things together on the fly. ”

“We never could afford the studio time to be in there 24/7,” adds guitarist/vocalist Brian Pretus. “A couple of songs ended up being stuff that we wrote on the spot.”

Those include “Naptime,” which moves from loping pop to group-chant hardcore in the space of two minutes, and penultimate track “Traveling Time,” which Pretus describes as a “palate cleanser.” Basically, a midtempo pop song, “Traveling Time” began as a Quinn solo track but found its way onto PEARS thanks to the band’s more open studio approach.

“Collectively, we figured we’ve danced around pop music our entire career so far,” Quinn says, “but we were like, ‘Let’s just do a full-on fucking pop tune. Why not?”

“Full on” is a good descriptor for PEARS in general. The album opens with feedback at the beginning of the riff-heavy “Killing Me” and closes when the even riff-heavier “Cynical Serene” (whose opening plays like Nirvana by way of Hum). In between are 12 songs that shake with can’t-sit-still energy, as the band—rounded out by the ace rhythm section of bassist Erich Goodyear and drummer Jarret Nathan—shifts on a dime between parts and sounds. Elements of prog and grunge intermingle with classic hardcore and hook-laden rock—and it can happen in the space of one song. (In this case, “Worm.”)

Atop all of it are Quinn’s voice and words, which took a different approach as well on this album.

“It makes perfect sense that this is the third act, but it’s not what I would have predicted it to be,” Quinn says. “I wouldn’t have guessed that the album would end on a bittersweet note. It’s more uplifting than either record that we’ve done, but it’s not a happy record.”