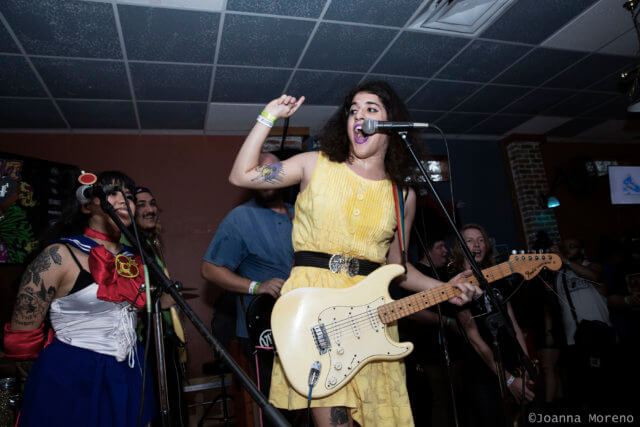 The indie-punk collective from Gainesville, Gutless, self-released their new 5-song EP “Some Voids…” for free or donation-based downloads, as well as a Portuguese-translated version titled “Alguns Vazios…” Originally a solo project started by singer-guitarist Vi Viana, Gutless grew into a dynamic band with a sound that ranges from symphonic piano and cello arrangements to blaring, fuzzy guitar shrieks on top of hardcore-punk drum beats.

“Some Voids…” was recorded and mastered by Rob McGregor (Against Me!, Hot Water Music, Fake Problems), who also recorded Gutless’s split EP with Consent in 2016. All of Gutless’s music is available for download on their Bandcamp page and for streaming on Spotify, Apple Music, and more.

Their upcoming full-length album is titled “Build and Burn” and it is a labor of love once again engineered by McGregor at Goldentone Studio in Gainesville, FL. Lyrically, it tackles issues such as surviving abuse, cutting off toxic relationships, dealing with creeps that fetishize your trans identity, drug and alcohol dependency, and rebuilding your community.

WHAT’S YOUR FAVO(U)RITE SCARY MOVIE?
"The Cat in the Hat (2003 film) (The first film that ever made Vivi cry from fear)."